I started off from my hotel in the early morning to chase the light and look for a decent cup of coffee. I was staying not too far from Montmartre so I set out on a walk only to hit a dead end in the coffee department. I kept walking where I discovered a new croissant on my way to Montmartre and hit an old favorite Cuillier. Montmartre will always be a special place for me as it was where I started my journey back in 2013. I had an apartment on Blvd de Rochechouart for three months.

I explored a bit around Rue des Abbesses and I wanted to see what new places had opened. There was an Italian spot on this very corner that opened up. I returned here for lunch at Roberta for pasta on the terrace. I probably ate more Italian than French food this past trip but I wasn’t complaining. The weather was so nice, I couldn’t refuse sitting outside for lunch and people watching.

It was nice to discover some hidden streets I hadn’t seen before in my old neighborhood like this one. I loved seeing this building covered in ivy. I am sure it is stunning in the later months of Autumn.

The neighborhood has changed so much since my time in 2013. There are some parts that still hold that old school Parisian charm but much of the neighborhood is slowly letting chain stores take over. I stopped in La Mascotte for a cup of coffee and a seat at the bar. It is a great spot for people watching. It was this older gentleman reading the newspaper at the bar that drew me in. The coffee isn’t amazing but the people watching makes up for it.

I walked back to my hotel in the 9th to check out and check into Pavillon des Lettres. I had only stayed at Pavillon de la Reine before this and I was very excited to explore this new hotel. The hotel has 26 rooms and each room is a different letter inspired by a French author. I was in room D for Diderot.

This was my view from the balcony and you can imagine my face when I saw the Eiffel Tower. I wanted to stare at this view forever.

I watched the sunset from my balcony for as long as possible before quickly changing clothes and meeting friend in Le Marais for dinner.

After dinner, I returned back at the hotel but ended up heading back out again. Once of my oldest Paris friends was in for one night and we had plans to meet for drinks. It was SO late but I couldn’t go back on my promise. (Melissa, if you are reading it was totally worth the late night)

We had drinks and chocolat chaud at Café de Flore until the café closed for the evening.

To read more of The Paris Diaries you can start here

P.S. Don’t miss My Paris Agenda and What I Pack for Long Flights 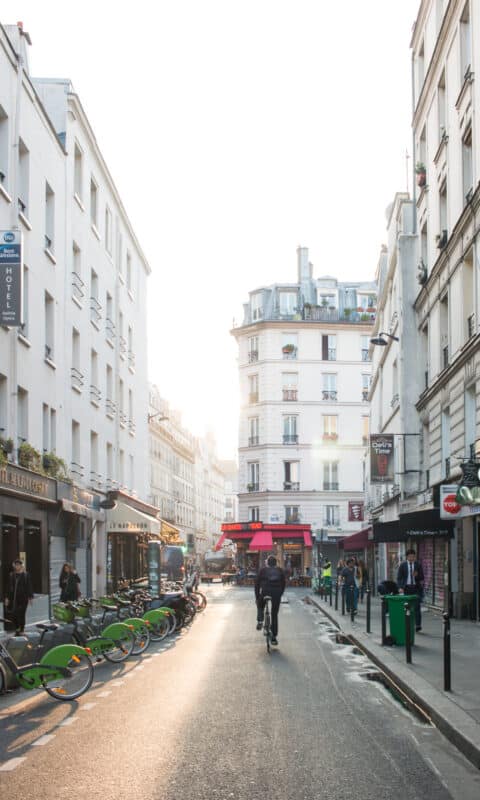