First off, I want to thank you all for following The Paris Diaries this Autumn. They were a little more spaced out than usual but I needed time to reflect and squeeze in everything. The purpose of the trip was to shoot The Wedding but when they booked my ticket I added on a few more days. It only made sense to push forward my annual October trip to Paris to September, instead of flying back again.

The Wedding was a lot of fun and a huge creative challenge. I am used to capturing Paris in the light, with empty street scenes, and now here I was shooting people and it was one very big day. When I took on the project, I knew that this was going to challenge me, and I wanted something new and different as a photographer.

Once the wedding was over, I was burnt out. I wouldn’t admit it until later. I was exhausted mentally and physically. I had just about another full week in Paris and there was so much I wanted to see and do. I had ideas, but here I was for the first time just stuck mentally. It was a bit of a creative block and I feel overstimulation. There were days where I had time to myself and I couldn’t figure out a plan for the day. Should I go to the left bank and shoot or should I stay close by in the neighborhood? I just shut down. I put so much pressure on myself as a solo business owner and personally. I can’t force the creativity, it has to come naturally. I was worried that I didn’t get anything new and different to share with you as an audience and for the print shop, I felt a bit defeated.

Looking back, I put way too much pressure on myself. I had about a week in Paris after the wedding and I feel I got a good amount shot. There are a few future posts which were a lot of fun but need to be put together properly.

I try to fly home on Mondays. A lot of things are closed on Mondays in Paris and it just makes the most sense. Sunday is my favorite day in Paris, so I wanted to make sure to enjoy it to the fullest. I visited the Bastille Market, picked up bread and croissant at my boulangerie, walked through Place des Vosges, brunch with friends, and I even played my first game of pétanque with my Paris family. It was the warmest day I had all year in Paris and it was my last. Everything worked out in the end and personally, I wish I could do it all over again. Hopefully, that opportunity comes again in Spring.

There was a turning point and something I didn’t realize was an issue until the very last day. This was the first time I had a phone that was connected to wifi. I typically get a SIM card but I don’t use it that often and rely on wifi where I can catch it around the city. I like being disconnected.  There were emails and messages clouding my thoughts and it was overwhelming, I felt stretched too thin.

My favorite part of Paris is getting lost on the streets and letting the city lead me. I never fully let go mentally until I gave up the phone. The minute I gave up my data connection I felt free. I could easily get away with “sorry I didn’t have service” to anyone that tried to contact me. After all, it was Sunday. I needed this more than anything, to disconnect. The sun set around 8pm that night, so I messaged a few friends when I was back in the apartment to meet me on a terrace for wine.

After wine and cheese at a local spot in the neighborhood, we crossed the Seine for dinner. I never really had an itch to connect, I was finally in the moment. As my friends and I headed back towards the right bank, we made one more stop at a cute café for wine. The air was still warm and the city was quiet as we walked home. I dropped my friends off and I kept walking along the Seine. When I looked at my watch it was close to 1 am. The night went so quickly and I still had packing to do. But as cliché as it sounds I waited patiently on the Seine, for the clock to strike 1, so I could watch one last sparkle of the Eiffel Tower. 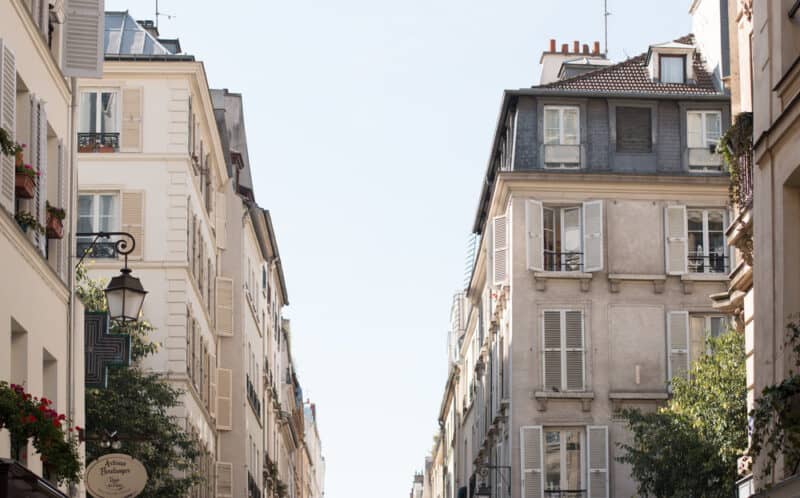